Now as I mentioned in my previous posts I have modeled the hull shape in 3D CAD software to allow CNC cutting of all the required components for the build.

The question that was always buzzing in my head is whether the CAD model is correct. Did I draw the shape correctly according to the plan? Did the "unroll" feature to compute 2D templates for the planks do what it is expected to do? Would the plank shape "re-roll" themselves back into the correct 3D shapes once cut and placed onto the build frame??

Being unsure, and also perhaps for a bit of fun, I decided to have a scaled model CNC cut from thin plywood to the exact shapes that were obtained with the process described previously.

The idea is that if the scale model can be succesfully assembled  (i.e. the precut planks shape up and respect the overlap along their length correctly) that would give a strong indication on whether to move on to cut the real thing ... a whole bunch of costly marine ply sheets is at stake here.

Here's therefore the 1:8 scaled model pieces I asked a local company to CNC cut for me. They include  a strongback with notches where to fit frame half shapes. The floor and 4 planks were cut as well from the 2D templates computed in Rhino. 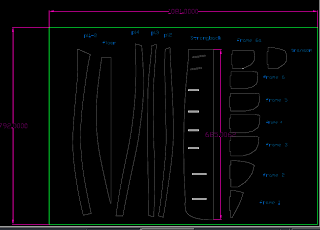 About CAD and CNC

I think the first milestone of the project has been achieved. I have redrawn the botas hull (frames, floor, stem and stern) in Autocad Inventor. I have then drawn the planks using the loft function. The plan was then to "unroll" the 3D surfaces resulting from the lofting procedure to obtain 2D flat shapes for subsequent CNC cutting (alongside the frames, floors, etc..).

Here's how the hull frames line up in Inventor: 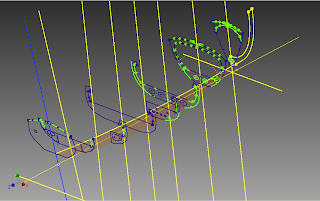 Unfortunately I found out that the "unroll" feature is not provided as standard in Autodesk Inventor and if I wanted to obtain 2D templates of the planks I had to look elsewhere.

I eventually found a viable solution after looking around on the web. I ended up redrawing the boats frames on another software for which a 60 day trial version is available free on the net. This software called Rhino 3D comes with an unroll feature for 3D surfaces. Having imported the frames (and the plank overlap offsets) from inventor I used Rhino's own loft function to draw the planks and then unroll them to Finally obtain the 2D flat templates of the planks I was after!

Here's the hull modeled in Rhino. The plank overlaps of this beautiful clinker hull shape are visible. Rhino allows to click on a 3D surface and "unroll" to a flat template... 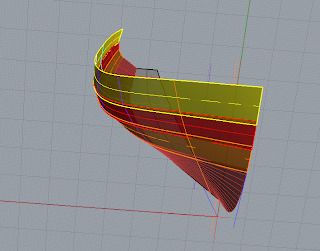 Great, now the whole boat is drawn in 2D . I will now use a third CAD program,  AutoCAD to compose the 2D shapes and arrange them within the typical size of ply sheets. The objectif is to efficiently nest the shapes to minimize costly marine ply waste.

Looking at the drawings

John's drawings are very detailed and easy to follow. The builders instruction booklet that came with them is also very useful.
It is a shame though that the plans do not include the drawings of the cabin as I expected .... or at least I thought from reading on the JW Builders Yahoo group. I contacted Fyne boat kits about this and they said that it is beyond them as they only supply the drawings provided to them by the designer.
Posted by Lorenzo at 01:30 1 comment: