A friend with teak is a friend indeed

A friend has proposed to me a bunch of teak strips (to use his words) he had laying around at his workshop since a while.
It turns out the bunch of strips are actually two half decks off a Riva like runabout project that was never finished.
They measure roughly 1.7 x 4 m, and consist of teak and elm strips  glued to a sheet of marine ply. The whole professionally assembled and brand new. The whole lot offered to me pretty cheap. Thank you Vassilis, it'll be great help for my boat project. 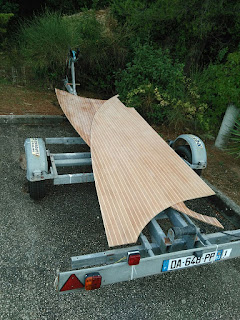 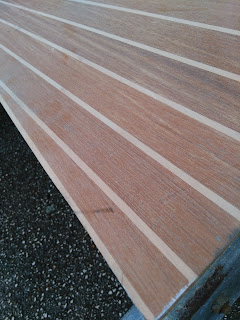 I'm trying to step up the gears as the countdown to next year's VeLa raid in Venice has started and I have committed myself to participate with the Pathfinder. Sure, the paint will be still sticky the day we get there in mid May 2016.

The teak decks I have got from Vassilis will be used to line the cockpit floor and the forward bunkflat.

One mobile phone down .... work carries on

Despite the loss of my mobile phone containing several pictures of the ongoing progress of my Pathfinder build, work has carried on.
Photographic evidence of spiling and fitting the benches is lost however here's some photos of the latest developments:
- the forward deck beams are epoxied and screwed in place 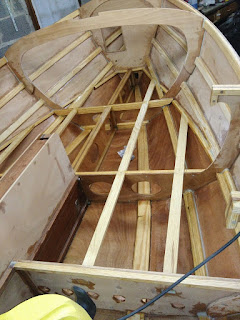 - and here's a picture of the (to use a Formula 1 expression) power unit of the boat. 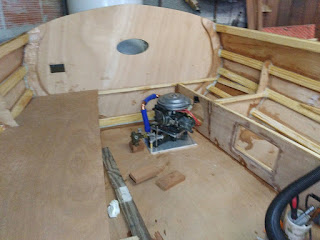 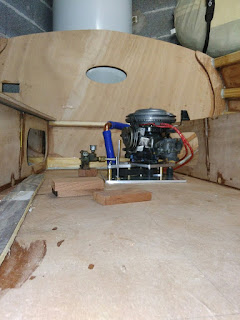 Instead of a standard transom hung outboard (which is unsightly to me on this kind of boat) or an outboard in a well, I opted for an own made inboard solution. The donor motor is a 1975 evinrude 4hp two stroke outboard. It is coupled to a honda 5 hp outboard gearbox and case through a belt and pulley arrangement.

The idea is to reproduce the concept of a sail drive, where the former honda gearcase will be built into the boats keel. A brass impeller pump is driven by gears from the gearbox shaft. 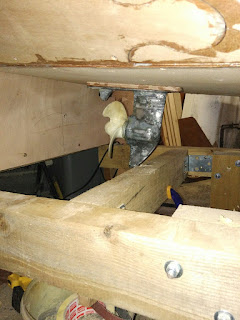 All components and parts were sourced rather cheaply on ebay while the motor itself was found in the trash bin of a small boatyard.

First power up of the modified engine in the boat worked really well. The adaptation work involved building an adapter flange, adding a shaft and bearings, belt and pulleys and an exhaust manifold. The engine itself received quite a lot of attention as well: new head gasket, coil, breakers and condenser and rebuilt carburettor. I have adapted the flywheel and recoil started from another similar aged evinrude outboard I order to keep the motor's height within the height of the main benches. The motor will be fully enclosed a watertight aft compartment not exceeding the height of the cockpit seats.

Being a small twin cylinder the motor is really quiet. It starts like a charm after I've adjusted the timing accurately.